I woke up early in Antibes, France. Really early. 4:30am. Because I had a flight to Malta leaving at 7am! Got my things together, gave Molly the ferret a kiss goodbye, and headed out the door to my Uber. Now, Uber is not my first choice. In fact, I had already purchased the return bus ticket to the airport. But I didn’t realize when I did that that it doesn’t start running until 6:30. The train starts up at 5:10, but there’s a long walk to the airport from the train terminal, and I really had no interest in trying to navigate that with my pack in the dark. So Uber it was. And Uber at a 2.4x rate, at that. Kill me now. We will never discuss what that fucking Uber cost me, but let’s just say that it was as much as my flight to Malta…I’m not kidding.

Got to the airport and breezed through security, and got to my Easy Jet gate. Had an entire exit row to myself, so I could lay down and try to sleep on the 2 hour flight. Apparently there aren’t a lot of people in Nice terribly excited about flying to Catania, Sicily at 7am on a Monday morning… 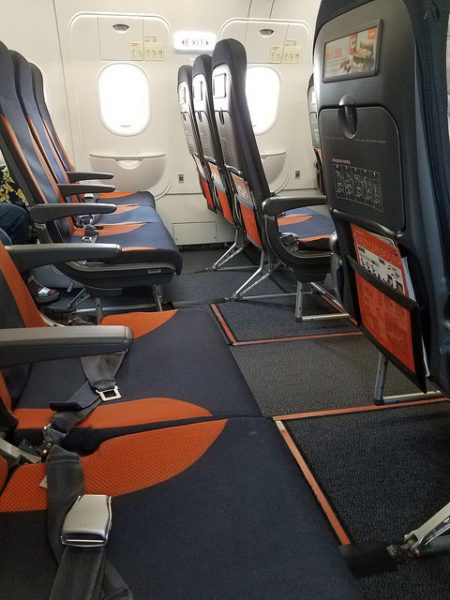 Landed in Catania, and settled in for the long haul. A 7, yes 7 hour layover. I considered leaving the airport and exploring the city, but by the time I would have had to deal with finding a place to store my luggage (no way I was carrying it around with me), get to the city, figure out what to do, get back, get my luggage, get through security…I decided it just wasn’t worth it. So I got a piece of pizza (when in Italy!), sat on the floor, and tried to entertain myself on my phone for 7….long….hours….

Finally, it was time to board Ryan Air to Malta! And if Malta in and of itself wasn’t exciting enough…BRIAN WAS IN THE AIR ON HIS WAY TO BARCELONA TO CONNECT TO A FLIGHT TO MALTA AND MEET ME THERE!!!! YAY!!! #internationallove We have both decided that 5 weeks is a ridiculous amount of time not to see each other, and from now on, he’s going to come and visit me every 3 weeks on my long trips instead of just one time in the middle. 🙂 He wuvs me. 😍 Short hour long flight and landed.

Again, didn’t feel like dealing with a damn bus, especially when I wasn’t even sure exactly which bus stop was closest to the airbnb, so paid a cab 27 euro. At least I didn’t have to negotiate- you go to the little taxi desk, tell them the destination, and they tell you how much and assign you a cab. Nice. But seriously, I should have been given a 50 euro refund… The guy had no clue where we were going. None. He weaved in and out of narrow winding streets for what seemed like forever. After I realized he was lost, I asked him if he wanted to call my AirBNB host. Nope. Ok…so we drove around some more. I was texting the host, asking him questions about cross streets or landmarks or anything. The driver had no clue what any of them were. Finally, I convinced him to call the host. He did. Wow! I didn’t realize Maltese was such an aggressive sounding language! Interesting! We drove and drove some more. The cab driver rolled down his window and asked some other driver something in Maltese. We made U turns. We turned into dead ends and had to back up. I was getting urpy in the backseat and if this Mr. Toad’s Wild Ride from hell didn’t end soon, the driver was going to be lost AND have a mess to deal with (the sign that said 50 euro cleaning fee was really the only thing keeping me from puking)…I finally convinced him to call the host again. After they hung up, the driver said the host was coming to get us. Jesus! What crazy off the beaten path, remote, rural place had I booked? Oh, just one on a freaking busy main street of a bay… The host was PISSED at the driver (Maltese apparently isn’t an aggressive language unless one of the parties is calling the other stupid…). The driver was PISSED. I was just happy to be out of that damn cab! The host showed me to the private apartment Brian and I would be calling home for the next few days. It was perfect, and the view of St. Paul’s Bay from the balcony was spectacular! 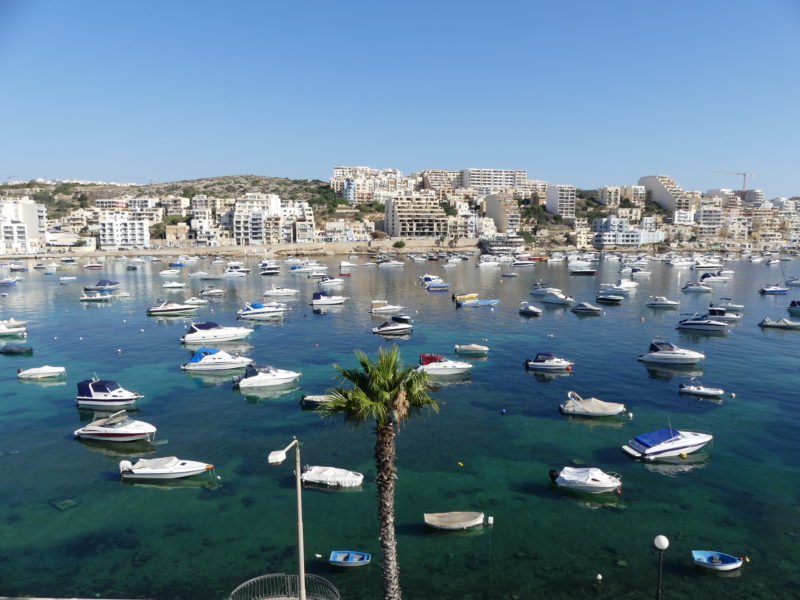 So I got in about 5 hours before Brian. After that crazy ass cab ride, I figured Brian would need moral and navigational support getting here, so I decided to meet him at the airport. Plus, I just wanted to see him sooner! ☺ No way in hell did I want to take another cab back to the airport- both for my sanity’s sake and my pocketbook’s. So I looked up the bus schedule online, and saw that the direct X1 bus would leave from just on the other side of the bay (super short walk) and take about an hour to get to the airport- arriving at the exact time Brian would. 3 euros. ❤ing it!! Headed down there with a bit of time to spare. Walked into the convenience store just to see if they by chance had Dr. Pepper. SCORE!!

I stood by the bus stop, sipping my Dr. Pepper like the boss lady traveler I am, counting down the minutes until my man arrived! Saw the X1 bus coming, pulled my 3 euros out of my pocket where they had been stashed separately for efficiency, walked up to the curb….and watched the driver literally look me straight in the eye and keep going. MOTHER FUCKER!!!!!!! Now what?! I looked at my phone. It was almost 8:40. Brian lands at 9:40, except I knew he was a little late leaving Barcelona. There were no other buses that would get me there before 10:30 though, and I had to make a connection (which is not something I was interested in doing in the dark when I had no clue where I was). So here we fucking go, cab #3 of the day. I came back to the house and called the cab guy the owner had recommended in his welcome guide. That guy said he couldn’t do it. FUCK! So I jumped online and searched for an alternative. There is no uber in Malta. Found something called Ecabs that I could book online. Rate was 24 euros and they said they’d be here in 10 minutes….we’d see… Sure enough, I got a text that they were arriving, went downstairs, and there was the guy! Super nice car, and as a bonus, he actually knew how to find his way to the airport on his first try!! Highly recommended.

Got to the airport, and Brian was only delayed by like 15 minutes. I started looking around for the car rental people. They were recommended by the airbnb host (I read about 9 quadzillon horror stories about rental cars in Malta and wanted to make sure I didn’t get screwed!). Percius Car Hire was going to meet us there at the airport with a sign to turn over our car (169 euros for 4 days, including airport drop off fees and full insurance). But they weren’t there… We walked back through the “welcome line” at the arrival gate a couple of times. Then went outside to look. Came back and walked the line one more time and found the lady. She was super nice and it was really easy to deal with the paperwork. Had our keys in no time and were rolling out of the parking lot into the Maltese night….

Let me tell you something about my boyfriend, Brian. This man can drive on the left side of the road like he’s been doing it all his life. Actually, since I’ve been gone he got his DNA test back and found out he’s 73% English, so that probably explains it. The first time he did it, we were in Borneo. No problem. 2nd time, South Africa. No problem. Now I figured it was time for a challenge, so I booked a manual!! #cheapass So he’s coming off about 17 hours of traveling, driving in the dark (which we never do), and shifting with his left hand. Like. A. Champ. Damn, I love that man! With me navigating, we actually managed to find the airbnb again. Good thing, because we had a brand new country to explore tomorrow!!